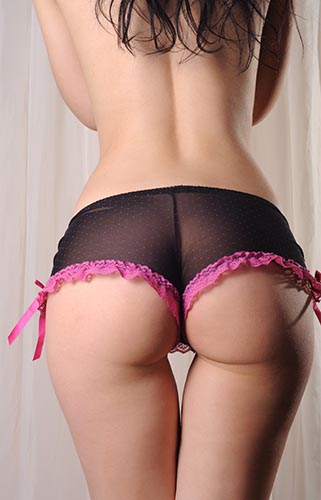 Over the course of time, what makes a woman beautiful and sexually attractive has changed. In the days of antiquity, a woman’s worth or beauty was largely attached to her ability to produce offspring. Since ovulation is not something that can be visualized by the naked eye, men have long used external cues to determine fecundity and health in females. Women with wider, “child-bearing”, hips were noted to be more attractive. This fascination with the curvaceous female is well demonstrated in the art of the Baroque era. Peter Paul Rubens (1577-1640) was a German-born Flemish Baroque painter, and a proponent of an extravagant Baroque style that emphasized movement, color, and sensuality. He was made famous for his love of portraying full-figured women that were curvaceous in their form, giving rise to the term “Rubenesque” when referring to plus-sized women. Over time, the concept of beauty changed from the more full-figured, curvaceous woman depicted by Rubens to an appreciation of the smaller figured, slender female.   Western cultures particularly began to idealize slimness and associated this with elegance, attractiveness, self-control, and youth. These women have been immortalized in the fashion magazines of the 70’s, 80’s, and 90’s. However, it seems of late that there has been a renewed interest in women with a more natural and curvaceous figure. Popular music and television icons such as Shakira, Jennifer Lopez, and Kim Kardashian have produced a resurgence in the idea that the attractive woman has a more curvy appearance. A woman with a round bottom and curvy hips and thighs has again become sexy and a sign of true femininity. Although the amount of total fat that determines a maximally attractive female can vary from society to society and between time periods, it is clear that a curvy rather than straight female figure is still very important in identifying an attractive female form. For that reason, liposculpture has remained one of the top 5 most sought after cosmetic procedures amongst women, according to the American Society of Plastic Surgeons and the American Academy of Cosmetic Surgery. Liposculpture allows a surgeon to carve out a more pleasing figure even if the body mass index is not significantly changed. However, some women do not have the underlying boney and muscular structure to give them the desired curvy look or perhaps do not have sufficient fat to allow for lipo-contouring. To that end, hip implants have been introduced to help give women curves in the hip and lateral thigh area which could not have otherwise been created due to existing patient anatomy.

Based on a review of the literature, it seems that many physicians around the globe have been working concurrently in the past years to produce a more aesthetic appearance to the hip/lateral thigh region using silicone prostheses. The idea of reconstructing the thigh with a prosthesis was first introduced in 1995 by Kon. At that time, he published a paper explaining his experience with placement of a new type of implant for augmentation of the lateral thigh. A paraplegic patient was noted to have significant lateral thigh deficiency and was deemed a suitable candidate for reconstruction with a silicone prosthesis, measuring 29 X 7 cm. This implant was placed below the fascia lata. From this early beginning, to present there have been several surgeons evaluating the utility of implants to improve the lateral hip/thigh region for purely cosmetic reasons. In March 2011, Dr. Paul Chugay and Dr. Nikolas Chugay evaluated the results of 18 hip augmentations since first beginning the procedure in 2010. In that paper the results were discussed with placement of a semi-rigid silicone prosthesis below the fascia lata via a lateral hip incision and noted only one significant complication: a case of suspected compartment syndrome. All 18 patients, however, had excellent aesthetic results and were happy with the procedure performed once recovery was complete. The implant used was an oblong shaped implant, designed by Nikolas Chugay, specifically for addition of volume and curvature to the lateral hip/thigh region.

The hip implant, used at Lafayette Cosmetic Surgery, is designed to improve the aesthetic contour of the hip/lateral thigh region. First introduced as a means to correct a congenital anatomic deformity, the hip implant can be used to treat deformities due to trauma, disease, or after surgical procedures. Transgender patients are excellent candidates for hip augmentation to correct a naturally male form and produce more curvature in the lateral portion of the hip/thigh region. Asian women frequently lack fullness in the hips and do not have sufficient fat to perform a fat grafting procedure are excellent candidates for hip augmentation. Although a depression over the greater trochanter is natural, many females wish to accentuate this region and fill out the area to give them a more prominent curvature and benefit from the use of a hip implant.

The surgeon is limited in the extent to which the lateral hip/thigh compartment can be augmented only by the implants currently available. Through work with our implant manufacturer, we have been able to create custom implants to augment larger segments of tissue. This, however, does come at an increased cost to the patient.

Depending on the patient’s physical dimensions and desire for more volume in the lateral thigh regions, three different types of implants can be placed in the subfascial plane (small, medium, large). AART (Aesthetic and Reconstructive Technologies, Inc., Reno, NV) has been able to develop 3 different implants for the authors’ needs measuring 207 mL, 250 mL, 545 mL. The ability to place a larger implant is largely based on the length the leg from trochanter to the insertion of the tensor fascia lata and implants should not be chosen that exceed this length.

Postoperatively the patient may begin ambulating starting on the evening of the procedure. They may shower the first postoperative day, making sure to keep dressings clean and dry the Robbins tape with a hair dryer on a low heat setting.

If permanent sutures were used by the surgeon, they may be removed at the one week visit. Patients are then allowed to begin light activity at week 2 and full unrestricted activity at weeks 4-6.

Patients are asked to wear an elastic compression garment for four weeks postoperatively to prevent dead space, thereby helping to reduce the risk of seroma formation. The legs are to be elevated as much as possible to allow for better lymphatic/venous drainage.

Patients are prescribed both narcotic analgesics along with muscle relaxants (diazepam 5 mg every 8 hours as needed for spasm) to assist with postoperative pain.

Augmentation of the lateral hip/thigh region with a silicone prosthesis is a great way to aesthetically enhance the outer portion of the leg and provide the patient curves “in all the right places”.