Everything you need to know about Bicep Implants and Augmentation Procedures 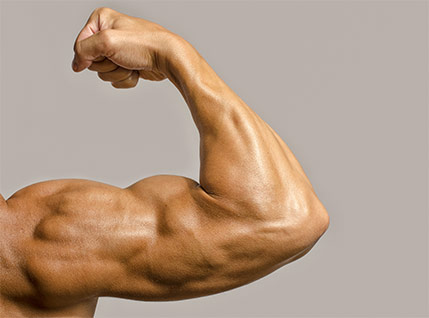 Fascination with the muscular male dates back to antiquity. Stars of the silver screen such as Arnold Schwarzenegger, Sylvester Stallone, and Jason Statham have popularized the muscular and well-built man. Male action figures and Playgirl centerfolds have further demonstrated the obsession with a muscular physique, causing many males to critique themselves and become dissatisfied with their outward appearance. Augmentation of the biceps is one of the muscle groups that lends itself to immediate results with significant improvement in the contour of the male form, with a potential to improve a male’s overall impression of himself.

Biceps augmentation was initially used by surgeons to help in the reconstruction of soft tissue defects of the upper extremity left by significant trauma or post oncologic surgery. While it doesn’t add to the patient’s use of the arm, the use of a silastic implant does provide “gratifying cosmetic results” that are durable, leaving surgeons an option for maintaining symmetry of the body. From its initial introduction for reconstructive purposes, Dr. Nikolas Chugay produced research in the area of biceps augmentation for cosmetic purposes in early 2006. The actual use of biceps implants for cosmetic reasons was begun in 2004, by Dr. Nikolas Chugay, when a 32 year old recreational bodybuilder presented with a complaint of an underdeveloped biceps region. By the time of publication in 2006, the author had completed a total of 12 augmentations in the sub muscular plane, below the biceps brachii muscle. This was followed by a retrospective review of 94 cases in 2009, which further evaluated the procedure and its potential risks and complications. All procedures were performed via an incision in the axilla and placement of the implant in the sub muscular plane. Based on the research done by Dr. Nikolas Chugay, it was noted that greater risks for complications were possible with placement of the implant under the muscle. With placement solely beneath the fascia, the improved contour was similarly noted but without the increased risk of damage to vital neurovascular structures. For that reason, Dr. Nikolas Chugay and Dr. Paul Chugay preferentially use a subfascial approach for implant placement, rather than the submuscular plane.

Initially, biceps augmentation was introduced as a means to treating asymmetries in the arm region left due to congenital anomalies, trauma producing atrophy of muscles in the upper extremity, and in those patients who suffered volume deficits secondary to trauma or post oncologic surgery. Biceps augmentation, for purely aesthetic reasons, is indicated for the patient who has hypoplasia in the area of the biceps muscle.

Based on evaluation at the time of consultation the surgeon can choose the implant that would best suit the patient’s body habitus.

On discharge from the office on the day of surgery, the patients have their arms wrapped in elastic compression sleeves to diminish the amount of swelling and potential for seroma formation. These sleeves are removed on the first day postop and a compression garment is applied that is to be worn at all times for a period of 4 weeks. Patients may remove the sleeves to shower and to wash the sleeves as needed. Patients may begin showering the day after surgery, taking care to dry the elastic tape over their incisions with a hair dryer on a low heat setting. The patient is instructed post-operatively to limit the use of the upper extremities and to avoid exertion or any heavy lifting. Patients may begin to use their arms as tolerated immediately after surgery but are restricted from heavy lifting or vigorous activity for 4-6 weeks post-operatively.

Patients seeking contouring of the upper extremity can present with a constellation of problems including: lipodystrophy, skin laxity, and muscle hypoplasia. In addition to treating the hypoplastic muscle with biceps implants, a patient may require some combination of liposuction of the arm, fat grafting to the arm, and/or excision of excess skin with formal brachioplasty. These will be discussed at the time of patient consultation.

The biceps augmentation operation is a relatively straightforward procedure that affords great results. Prudent dissection of the pocket for the implant is essential for optimal cosmesis and to prevent implant malposition. The vast majority of dissection during the procedure is blunt with natural tissue planes, thus preventing any damage to vital structures in the upper arm. While a submuscular plane has been achieved, it is our current practice to place the implant in a subfascial position, affording excellent cosmetic results.